The core of alphaTab is the data model. It contains all the information about a music piece like the title, author, instruments contained down to the individual notes and their effects.

Everything in alphaTab is built around this data model:

The data model of alphaTab tries to avoid storing any visual information. It is a semantic description of the music sheet on which tracks, bars, notes etc. exist and what effects they have.

This documentation will not go through all the individual properties of the data model but rather describe the rough structure and where to find what. We recommend to have a look at the code documentation (TS doc, XML doc).

Direct modification of this data model is usually not easily possible. The importers do the complicated job there to build the right structure and wrap-up the consistency of the model. While some modifications might be possible and are reflected after a re-rendering, others might fully break the rendering pipeline due to the inconsistencies or unexpected values.

The main hierarchy of alphaTab starts of with the alphaTab.model.Score class. From there a hierarchical structure is going down to the indivdual note:

Some general facts about the data model:

The Score class contains some high-level information like the song title, artist, copyright holder and main tempo. It also contains a stylesheet property which is the only place in the data model where potentially some visual information is stored. Some file formats like Guitar Pro give some additional hints on how to render the music sheet.

A score is one whole file loaded (e.g. Guitar Pro or MusicXML) where all the individual instruments are inside. 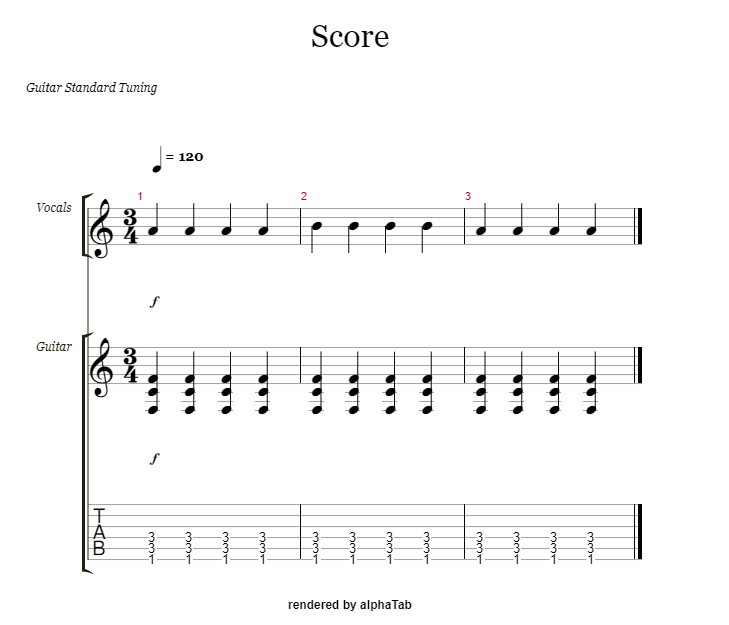 The MasterBar items stored in score.masterBars contain information which is valid across all tracks for a particular bar or measure.

This includes information like time signatures, key signatures or repeats. alphaTab expects all bars of all tracks to follow the same playback sequence. Pieces where maybe the first instrument is repeating the first bar 5 times while the second insturment is continuing.

This is needed to consistently align the music notation elements when rendering multiple tracks at the same time, or when handling the audio playback.

When you have a music piece which has e.g. 5 bars (aka. measures) and 3 instruments, the master bar 1 describes the details about the first bar of all 3 instruments. 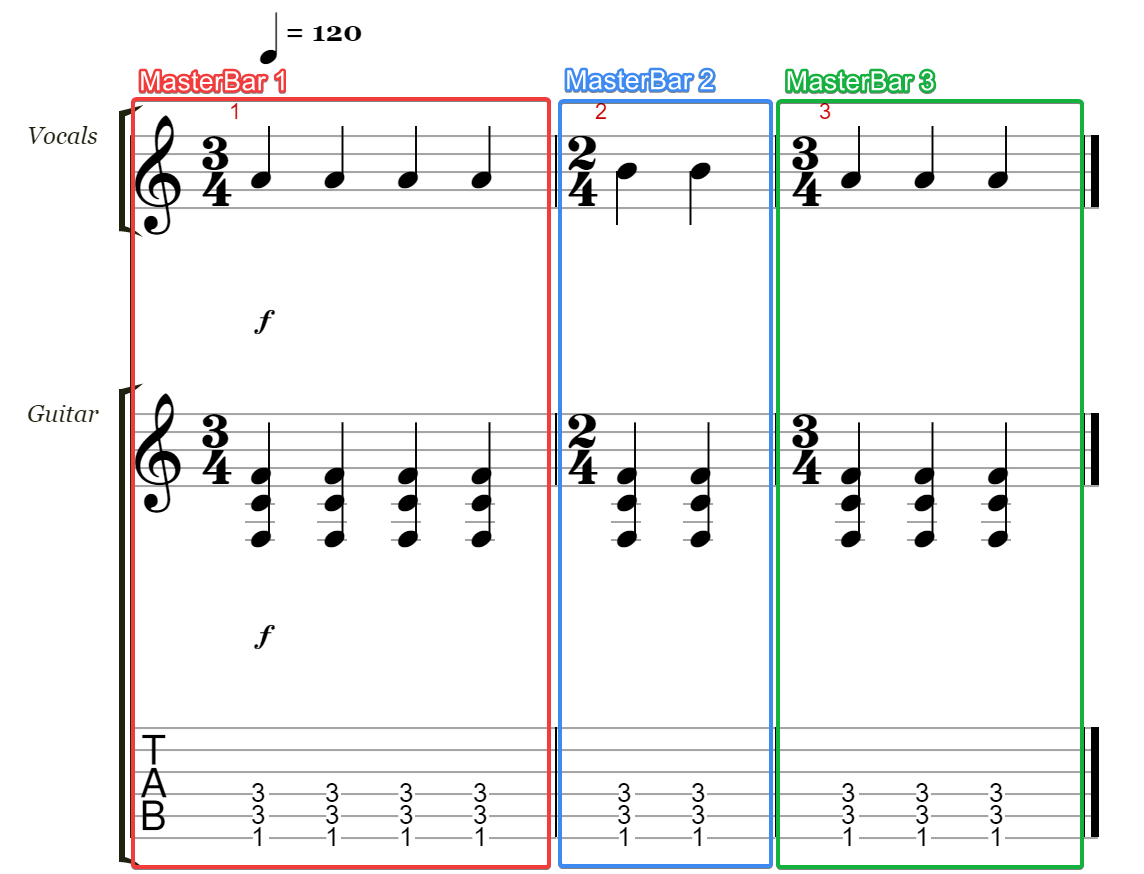 A Track (aka. Part) represents a single instrument of the overall music piece. Like the lead guitar or the drums.

The track has a name and defines some playback information via the playbackInfo property. The playbackInfo of the track contains info like the midi channels and program used for playback.

The track contains on the next level the individual staves which contribute to the instrument.

When you have a song with vocals and guitar, the vocals are one track and the guitar is one track. 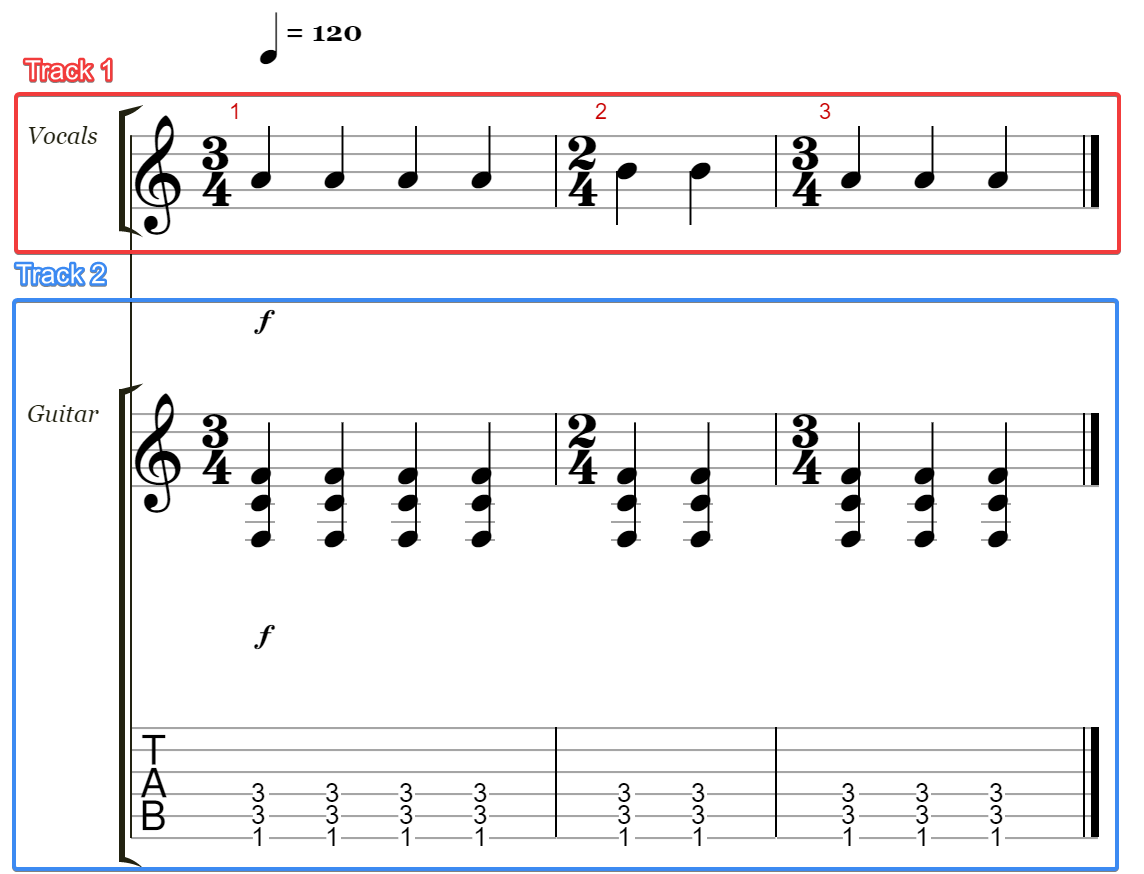 A Staff is the logical separation of the track into the individually played parts on the instrument. Like on a piano two separate staves might indicate what notes to play on the left and right hand.

The staff is again just a container for the individual bars of the song. It contains some information about which visual staves to show or the string tuning for fretted instruments.

In the following example you can see both kinds of staff representations visually. For the first track we have two individual staves in the data model. Each staff of the first track has own individual notes inside. On the second track there is only one staff in the data model but still it is displayed as two visual staff representations. Both visual staves of the second track have the same notes, but just with a different display (standard notation or guitar tabs). 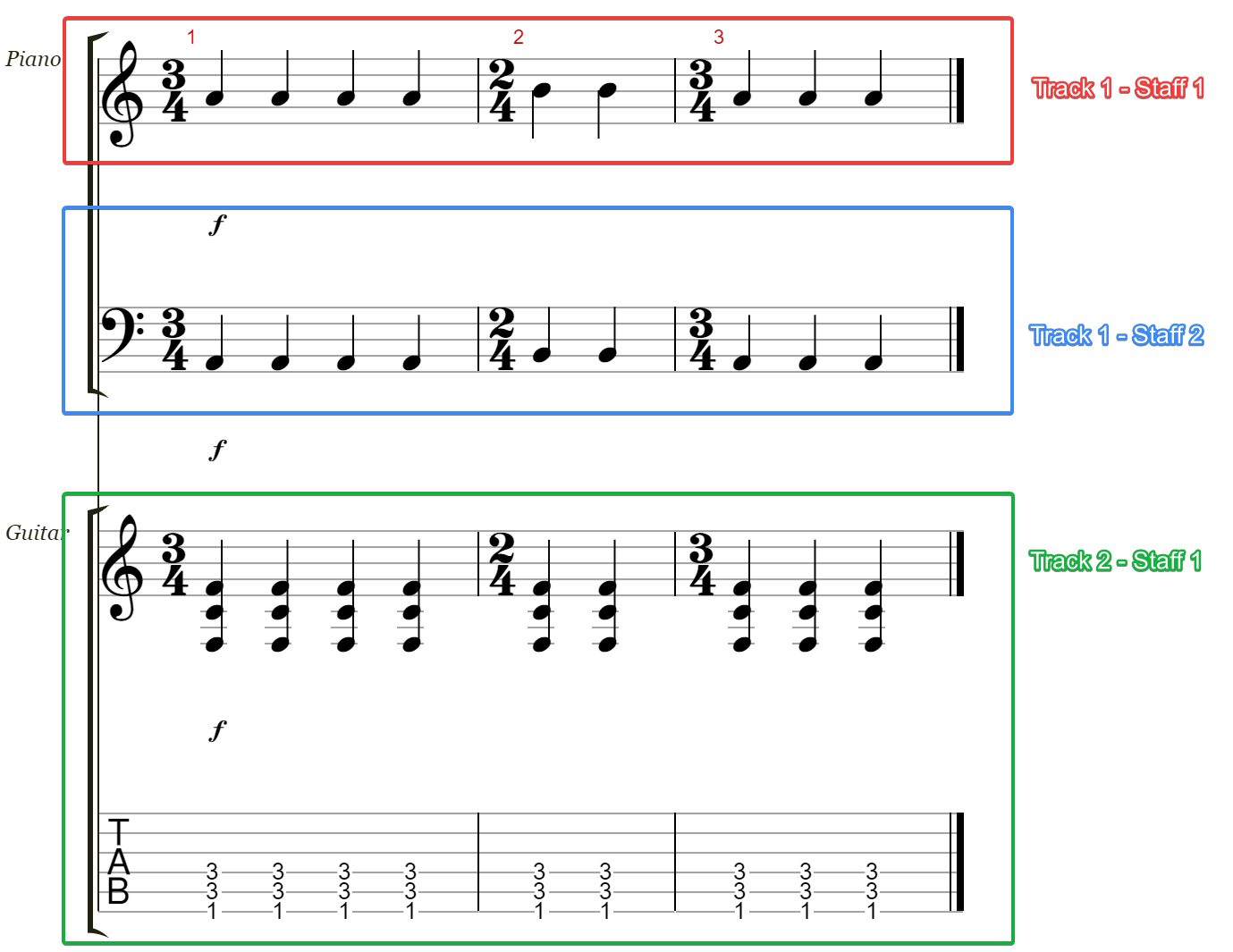 A Bar (aka. measure) is another container to bring us closer to the individual notes. Bars split the staff into segments separated with vertical lines when rendered.

The bar itself defines some basics like the clef shown or if simile marks indicate a repeats. The list of bars is ordered in the timewise / indexed fashion.

The bars contain voices as a next level. 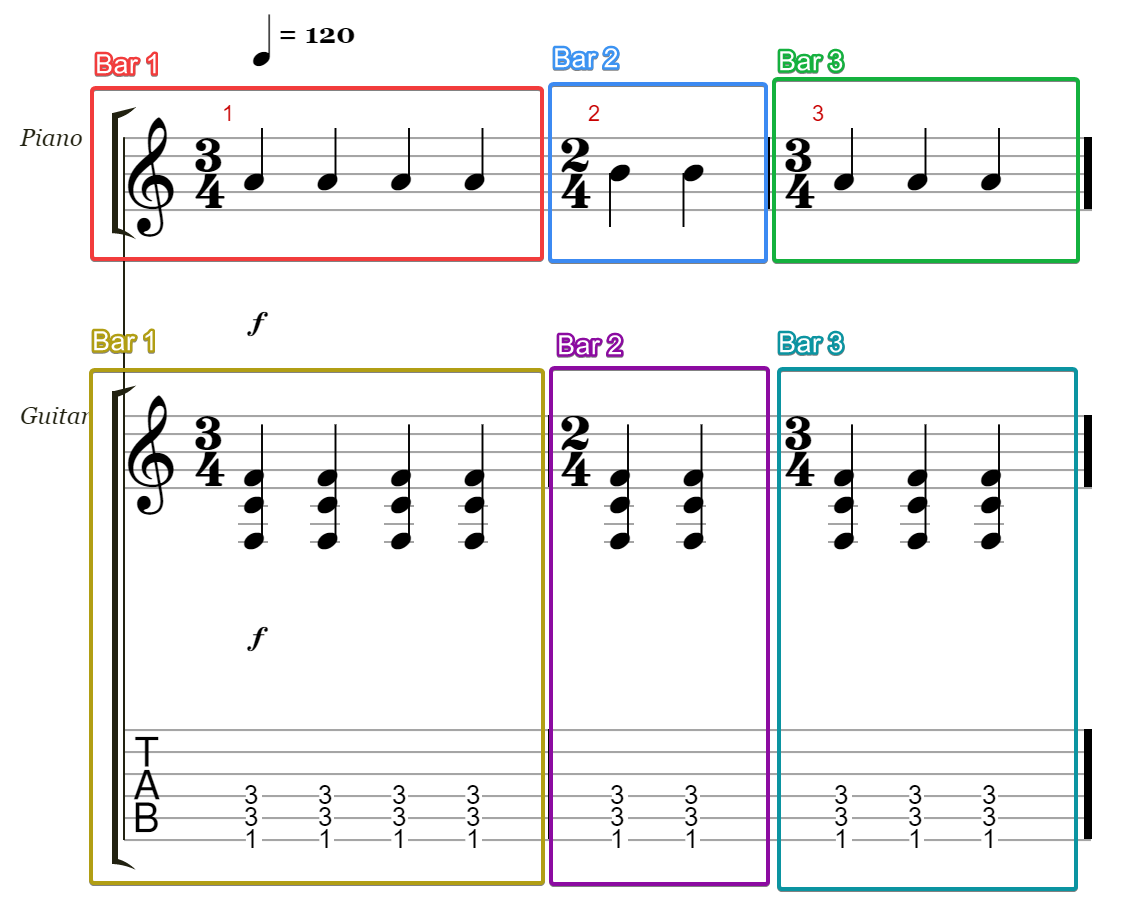 A Voice allows to have multiple independent notes placed within the same bar indicating the simultaneous playing of them with different duration.

The voice is again just a container for the individual beats played in it. Multiple voices are usually only used for certain types of instruments where this kind of display and play type is possible and common. It is similar to the concept of multiple staves. Voices can also be seen as multiple staves squashed into one.

This list is ordered in the fashion that the first item is the primary voice, and others are considered additional ones.

A Beat (aka. Chord) group multiple notes played at the same time with the same length.

This is the first level here we have a bit more information about the actual music notation like: the durations, tuplets, lyrics, whammy bar effects, chord diagrams, grace notes, etc. This list is ordered in a timewise fashion from left to right.

The notes will ultimately contain the individual notes. 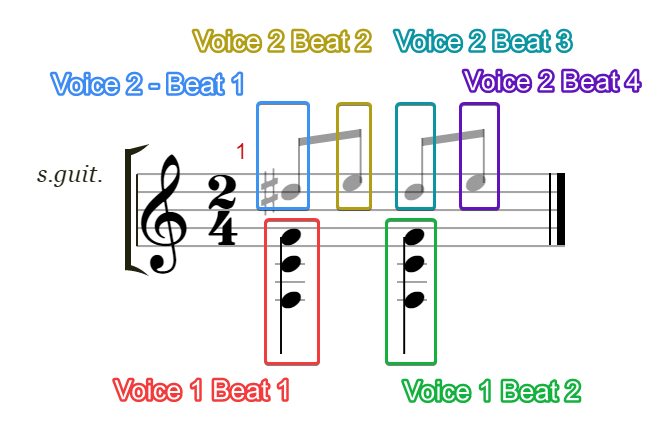 A Note represents a single musical sound played by the instrument.

In alphaTab there can be 3 types of notes:

The note list is not ordered in any particular fashion.

Notes have a huge set of annotations and effects which can influence the display and playback like: 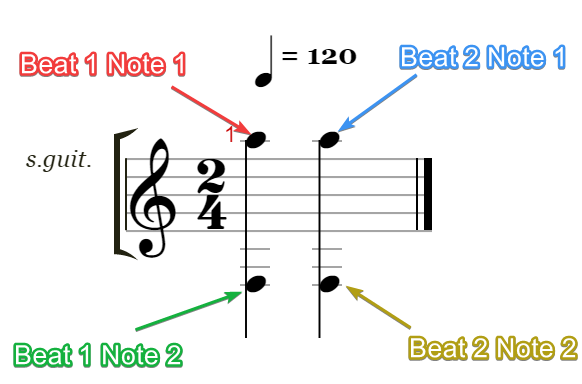